History called her "The Temptress"! 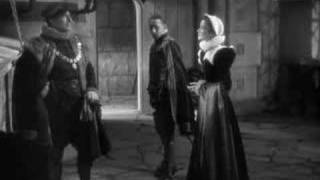 Katharine Hepburn stars as the titular Scottish regent whose return to her native land from France in the company of secretary David Rizzio (John Carradine) alarms Queen Elizabeth I (Florence Eldridge), the latter keenly aware of her cousin's ambitions for the British throne. Yet Mary must first deal with the Scottish nobility, led by her half brother, the earl of Moray (Ian Keith), who challenges her Catholic faith and unmarried status. The Protestant earl of Bothwell (Fredric March), smitten with Mary, helps her win over the nobility and assume the throne of Scotland. Despite her love for Bothwell, she refuses to marry him, instead wedding the fickle Lord Darnley (Douglas Walton) since he is the heir to Elizabeth's throne. The Virgin Queen retaliates by plotting with Moray to end Mary's reign. Despite Katharine Hepburn's preference for George Cukor, producer Pandro Berman chose Ford to direct this adaptation of Maxwell Anderson's apocryphal blank-verse drama. Hepburn responds with a galvanic performance, and Ford's influence, most noticeable in the imaginatively photographed interiors, lends dramatic resonance to MARY OF SCOTLAND's enjoyable blend of myth, history, and inspired pageantry.

Historical drama about Mary Queen of Scots, who clashed with her cousin, Queen Elizabeth I, and posed a serious threat to the English throne.