Owen The King of Whys

Get email alerts for Owen
Currently Out of Stock: We'll get more as soon as possible
Notify Me When Available
Add to Wishlist
Format:  CD
sku:  6CACQ
Our customers love us! 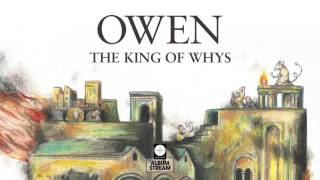 Pitchfork (Website) - "This is Kinsella's most extreme Owen album yet, the most bitter, the funniest, the saddest, and the most ambitious."

Personnel: Michael Noyce (viola); Andy Hofer (trombone); Sean Carey (piano, vibraphone, drums); Ben Lester (synthesizer); Jeremy Boettcher (upright bass).
Audio Mixer: Zach Hanson.
Recording information: April Base Studios; Shirk Studios.
Illustrator: Melina Ausikaitis.
The King of Whys is Mike Kinsella's ninth LP as Owen, and his first to be recorded wholly outside of metropolitan Chicago. Instead, it was assembled at April Base Studios in Eau Claire, Wisconsin, home of indie folk band Bon Iver, whose drummer, S. Carey, produced the record. The release also showcases a fuller band sound provided by several guests, including Carey, who plays multiple instruments here. Kinsella's distinctive, vulnerable delivery is still intact, though, with self-doubt and private apologies among the lyrics. Though it opens with acoustic guitar, "Empty Bottle" features a pulsing rhythm section and electric guitar, along with female backing vocals. The song lightens for passages about sleep and dreaming that are accompanied by pitch bends and melodic keyboards. In contrast to that track's weighty rhythms, "Tourniquet" has arpeggiated acoustic guitar and offset keys that come together in polyrhythms that float under vocals ("This tourniquet hasn't stopped the bleeding yet/I fear that I might lose a limb/Or a wife/Or whatever's left inside"). The more spacious "An Island" brings acoustic guitar, pedal steel, spare piano and trombone, and light synths to one of the quieter offerings. There isn't a single solo acoustic-guitar ballad in the set, but even with the ramped-up accompaniment, The King of Whys is still more intimate than any of Kinsella's prior bands, like American Football or Owls, or even Joan of Arc. The album is otherwise not likely to stand out among Owen's catalog, but it's still an affecting and worthwhile effort from an artist who's as reliably tuneful as candid. ~ Marcy Donelson