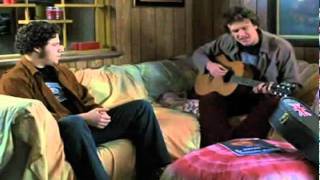 The fans demanded it, and so it has come. "Freaks and Geeks," the Emmy award-winning series about the trials and tribulations of outsiders in 1980 Michigan is finally available on DVD in its original form, with all of its original music. The complete series includes all 18 original episodes; the director's cut of the pilot with never-before-seen footage; deleted scenes; outtakes; behind-the-scenes footage and 29 commentary tracks by the actors, writers and directors who made the show. If you wanted it, it's in here. Even if you didn't want it, it's in here. So rock on and enjoy!

Despite being cancelled after only 18 episodes, the subsequent cult built up around the FREAKS AND GEEKS television series has seen the show's popularity skyrocket. Internet campaigns and strong word-of-mouth have lead to a burgeoning fanbase which has clamored for the release of the shows. Now finally available, the program is presented here in its entirety. Set in 1980, the show ostensibly follows two groups of high school kids (the "freaks" and the "geeks") as they attempt to navigate the pitfalls of adolescence. Among the colorful characters are the Geeks: Bill, Sam, and Neil, three awkward pre-teen friends undergoing some excruciating, but funny, growing pains. The Freaks are a group who revolve around Sam's older. army-jacket-clad sister, Lindsay, a talented mathematician undergoing various crises of confidence involving life, college, and her on-again, off-again stoner boyfriend. It all adds up to a potent mixture that is moving, funny, and grounded in a reality which accurately captures the often painful experience of being a teenager.

28%off
Some Kind of Wonderful
$6.50 Super Savings
Add to Cart