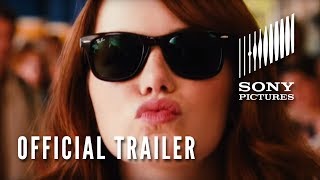 Official Easy A Trailer - In Theaters 9/17

Nathaniel Hawthorne's THE SCARLET LETTER is re-imagined as a contemporary high school comedy in this tale of a scheming student who plots to give her popularity a boost by painting herself the easiest lay in school. Like most high school kids, Olive Penderghast (Emma Stone) just wants to be popular. So much so than when her best friend, Rhiannon (Aly Michalka), asks Olive how her weekend went, the bored teen decides to whip up a spicy white lie just to make things interesting. But that minor exaggeration begins to take on a life of its own when it reaches the ears of motor-mouth gossip Jesus freak Marianne (Amanda Bynes), and in no time the entire student body is abuzz over unassuming Olive's unrepentant weekend of debauchery. Of course not a word of it is true, but that doesn't stop everyone in school from talking, and an amused Olive from deciding to go with the flow. Playing the role of the hussy to the hilt, the girl who used to be invisible begins dressing provocatively and turning heads in the hallways. The students aren't the only ones taking notice, either; Olive's English teacher, Mr. Griffith (Thomas Haden Church), is concerned that the kind of attention she's receiving isn't healthy for a developing girl, and his wife (Lisa Kudrow), the school guidance counselor, is in full agreement. The only people who seem remotely interested in the truth are Olive's trusting and open-minded parents (Stanley Tucci and Patricia Clarkson). As Olive takes note of the parallels between her own situation and the plight of the SCARLET LETTER heroine Hester Prynne, she realizes that she may be able to manipulate her newfound notoriety to give fellow classmate Brandon's (Dan Byrd) popularity a much-needed shot in the arm. Olive never thought her little game could possibly have any negative effect on anyone but herself, but when loose lips start sinking ships all around her, she realizes that it's high time for the truth to come out.

25%off
Teenagers From Outer Space
$5.95 Spring Sale
Add to Cart

60%off
American Pie Presents: The Book of Love
$5.98 Spring Sale
Add to Cart