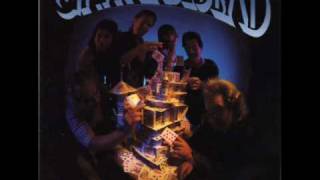 The Grateful Dead: Jerry Garcia, Bob Weir (vocals, guitar); Brent Mydland (keyboards); Phil Lesh (bass); Mickey Hart, Bill Kreutzmann (drums, percussion).
Engineers include: Tom Flye, Jeff Streling, David Roberts.
Recorded at Club Front and Skywalker Ranch, San Rafael, California; Studio X, Petaluma, California.
Much of BUILT TO LAST reflects the kinder, gentler Grateful Dead of the band's final years, from the cheerful sound of "Foolish Heart" to the uncharacteristically blunt environmental plea "We Can Run." In sharp contrast in tone and approach is Bob Weir's aggressive confrontation of drug addiction in the ragged "Victim Or the Crime," a song that actually benefits from the soft pedaling of the rest of the album.
Jerry Garcia's weary and endearing vocals on the comfortable-sounding tune "Built to Last" and the even more affecting "Standing on the Moon" move this album closer to the heart of the Grateful Dead aesthetic. "Picasso Moon" features the kind of instrumental derring-do that one expects from this fearlessly improvisational group. On the other hand, "I Will Take You Home," a saccharine piece of work from keyboardist Brent Mydland and songwriter John Barlow, ends the album on a strange note. Maybe it suffers for not having the distinctive chattering of Garcia's guitar playing, which makes nearly everything on the album worth listening to.