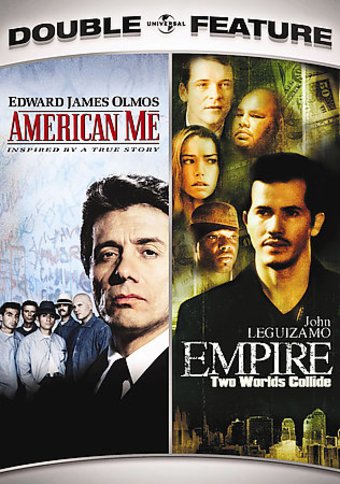 AMERICAN ME: A Hispanic crime lord creates a position of power for himself and his comrades in prison that extends to the streets of east Los Angeles. At first, he is elated by the control he wields, but as maturity and a blossoming relationship affect his consciousness, he realizes that his desire for social change is mired in his own cult of violence. Based on a true story.

EMPIRE: EMPIRE, the debut film from director-writer Frank Reyes is a Latin GOODFELLAS, chronicling the rise and fall of Victor Rosa (John Leguizamo), a Puerto Rican drug dealer working the violent streets of the South Bronx. With an eye for money and a head for business, Victor dreams of one day achieving the wealth and success of a legitimate businessman. When Victor discovers that his girlfriend, Carmen (Delilah Cruz), is pregnant, he jumps at the chance to give up the dangerous drug trade and joins forces with two new friends, Jack (Peter Sarsgaard)--a flashy Wall Street Investment banker--and his girlfriend, Trish (Denise Richards). Jack offers Victor a new way of life and promises him access to "sure thing" investments. Eager to go legit, Victor quickly embraces Jack's standards of living. He gives up the streets of the Bronx for Jack's slick Soho loft and moves into the fast-talking, money-driven world of Wall Street. However, Carmen misses the warmth and familiarity of her roots in the South Bronx, and Victor is torn between his own ambition and his desire to please her. Ultimately, he realizes too late that Jack and Trish are not all they seem to be, and his plans begin to falter as he is forced to accept the magnitude of their betrayal.

Pirates of the Caribbean: On Stranger Tides (DVD)
$10
Add to Cart