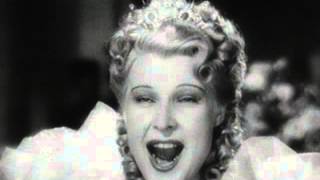 Dazzling? Daring? The Great Waltz may have you searching for ways to describe its great charms. This cinematic rhapsody loosely based on the life of composer Johann Strauss is truly "an overlooked gem" (The Motion Picture Guide). To capture what the film calls "the spirit" of Strauss' music, The Great Waltz combines exquisite craftsmanship with spirited inventiveness. The splendid backlot re-creations of Viennese settings range from convivial biergartens to ornate palaces. Dimitri Tiomkin's arrangements of Strauss' incredible music (with lyrics by Oscar Hammerstein II) swirl and dive. And the camerawork glides with bravura artistry. Julien Duvivier directs, getting radiant performances from two-time Oscar-winner Luise Rainer (The Great Ziegfeld, The Good Earth), Fernand Gravet and Oscar-nominated diva Miliza Korjus.

A film biography of composer Johann Strauss which is also a good romantic comedy and wonderful musical. By all means, if you're looking for the life of the bank clerk-turned-composer, avoid the 1972 version and watch this one, which features Strauss's greatest hits.

26%off
Bachelor in Paradise
$9.60 Spring Sale
Add to Cart

26%off
All the Brothers Were Valiant
$9.60 Spring Sale
Add to Cart

26%off
Sunrise at Campobello
$9.60 Spring Sale
Add to Cart

26%off
The Magnificent Yankee
$9.60 Spring Sale
Add to Cart