Robert Alda plays the talented composer, George Gershwin, in this moving tribute to one of America's premier musical artists. 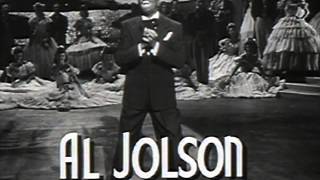 Rhapsody in Blue is a story that is as enchanting as the music of its central character, the legendary George Gershwin. Robert Alda plays the talented composer in this moving tribute to one of America's premier musical artists. Although it was intended that the Gershwins' eldest son, Ira, take piano lessons, it was his younger brother George who displayed a real talent for music. Following years of practice and an assortment of jobs, George worked his way from a music hall pianist to a Tin Pin Alley "song plugger." Gershwin experienced his first great success with "Swanee" (sung in the film by the man who made it famous, Al Jolson). Despite his ensuing accomplishments with hit songs and stage successes, the musical genius yearned for something greater -- to create unique American music, combining the European classics and popular songs.

The life of George Gershwin, one of the greatest composers in American history, is depicted. Among the many conflicts he faced was between his love for American popular music and his reverence for the great classics. Making cameo appearances are Al Jolson, and Anne Brown. Academy Award Nominations: Academy Award Nominations: Best Sound Recording, Best Scoring of a Musical Picture.

Cinematic biography of legendary composer George Gershwin. Beginning with Gershwin's boyhood in Manhattan's Lower East Side, the film follows the path of his career as he produces one musical classic after another. Also dramatized are Gershwin's relationship with his famed lyricist brother, Ira, and the effect of Gershwin's innermost demons on his both life and work. The film's soundtrack includes: "Rhapsody in Blue", "Concerto in F", "Someone to Watch Over Me", "S'Wonderful", "My One and Only", and "Embraceable You".
This product is made-on-demand by the manufacturer using DVD-R recordable media. Almost all DVD players can play DVD-Rs (except for some older models made before 2000) - please consult your owner's manual for formats compatible with your player. These DVD-Rs may not play on all computers or DVD player/recorders. To address this, the manufacturer recommends viewing this product on a DVD player that does not have recording capability.