John Ford's Legend of the Southwest! 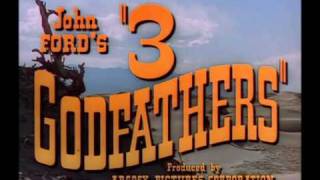 In John Ford's 3 GODFATHERS, based on Peter B. Kynes's allegorical novel about a trio of bandits, Robert Hightower (John Wayne), Pedro Roca Fuerte (Pedro Armendariz), and William Kearney, aka the Abilene Kid (Harry Carey Jr.), robs a small-town bank in Arizona under the nose of Sheriff Buck Sweet (Ward Bond). Although Abilene is wounded, the trio makes a clean getaway, with Buck's posse in close pursuit. Realizing that Buck has set a trap for them at the Mojave water tank, the bandits head toward Terrapin Tanks but lose the trail and their horses in a terrible sandstorm. Now on foot, they find the tanks defunct but come upon a lone covered wagon with a woman (Mildred Natwick) about to give birth. Although they're able to deliver the baby, the mother dies--but not before getting the bandits to promise to protect her child. Ford's sentimental tribute to the great Western icon Harry Carey Sr. (The screen dedication reads, "To the memory of Harry Carey, bright star of the Western sky"), who starred twice in silent versions of the story (including Ford's 1919 film MARKED MEN), 3 GODFATHERS features fine performances by Carey's son and by Wayne, who developed his famous persona in part by emulating the elder Carey's onscreen expressions and mannerisms. An air of tender inspiration permeates the film, which combines rousing action scenes with surprisingly subtle moments of self-sacrifice, redemption, and love.

Three gunslinging outlaws, escaping from a botched robbery, discover an abandoned woman giving birth and help deliver her baby. Though she doesn't survive the delivery, they adopt her newborn son as their own and carry him on a desperate trek through the desert to the aptly named town of New Jerusalem, following the North Star.

Judy Garland
The Quintessential All the Songs of her Most Celebrated...
$10.90 CD Sale
Add to Cart