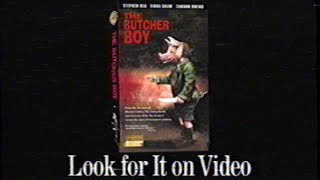 Director Neil Jordan expertly blends fantasy and reality in the saga of Francie Brady (Eamonn Owens), an energetic and imaginative boy whose bleak existence in a small 1960s Ireland town eventually drives him to drastic measures. With his friend Joe (Alan Boyle), Francie escapes into a world of comic books, television, and science fiction films to cope with his mentally ill mom (Aisling O'Sullivan) and alcoholic father (Stephen Rea, who also plays the adult Francie). Tragic circumstances mount, and the chasm between Francie's imaginary life and the drab reality of rural Ireland grows too great, leading to bloody consequences.

Jordan scripted THE BUTCHER BOY along with the author of the novel, Patrick McCabe, and the result is an unusual and rewarding blend of pitch-black comedy and wry social commentary. Owens, in his screen debut, is an absolute marvel as the lead, strutting through the film with the irrepressible cheek of a Marx brother. Cleverly avoiding a depressing or obvious depiction of Francie's breakdown, the film is a truly original, funny, and horrifying work that will likely gain recognition as a cult classic. Sinéad O'Connor appears as the Virgin Mary and also sings the title song.

THE BUTCHER BOY, Neil Jordan's adaptation of Patrick McCabe's novel, is a bold, brash, and original romp through the life of a troubled young Irish boy.