In the Cool of the Day
Warner Archive Collection (series)

The romantic intrigue between two married couples during a vacation in Greece. 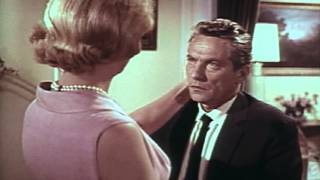 Susan Ertz's novel of romantic intrigue in scenic Athens comes to the big screen under the stewardship of John Houseman. Producer Houseman elevates the story above mere sudser status by recruiting a powerhouse quartet of players to play the intertwined couple: a young Jane Fonda (in her third motion picture performance), Angela Lansbury, Peter Finch and Arthur Hill (fresh from his award winning run in Who's Afraid of Virginia Woolf). Fonda plays Christine Bonner, the malady ridden bride who feels herself wilting under the overprotective care of her doting husband, Sam (Arthur Hill). Sam enlists the aid of his publisher friend Murray to save his marriage and help heal his wife. Unfortunately for the Bonners, Murray has been trapped in a loveless marriage with his wife, Sybil (Angela Lansbury), for quite some time and sparks fly between Murray and Christine. A romance blossoms that threatens to have both touching and tragic results.

In this drama of romantic intrigue and infidelity, Sam and Christine Bonner (Arthur Hill and Jane Fonda) are a married couple whose relationship has hit a rough spot. While Sam loves Christina very much and would do anything for her, she feels unsatisfied and suffocated by him; she wants more space for herself and would like to have a baby. Sam is more than willing to help, but matters become more complicated when he introduces Christine to Murray Logan (Peter Finch), a friend from work, and his wife Sybil (Angela Lansbury). Murray and Sybil are not at all happy together; ever since an auto wreck claimed the life of their son, Sybil has been emotionally on edge and blames her husband for the death of her child. When Murray meets Christine, he finds himself attracted to her; she is also interested in him, but neither are in a position to do anything about it. Sam arranges for the two couples to take a vacation to Greece together, hoping a change of scenery will bring a spark back into their lives. However, Sam's father Frederick (Alexander Knox) falls ill just as the couples are about to leave, and he's forced to stay behind. While in Greece, Murray and Christine finally succumb to their desires and begin an affair; an angry Sybil retaliates by both having a fling with a local man and spilling the beans to Sam about Murray and his wife. John Houseman, later to become famous as an actor, served as a producer on this film.

Death | Romance | Love Triangle | Marriage | Affairs | Love Triangles | Romances | Vacations | Flying | Love | Couples | Diseases
This product is made-on-demand by the manufacturer using DVD-R recordable media. Almost all DVD players can play DVD-Rs (except for some older models made before 2000) - please consult your owner's manual for formats compatible with your player. These DVD-Rs may not play on all computers or DVD player/recorders. To address this, the manufacturer recommends viewing this product on a DVD player that does not have recording capability.