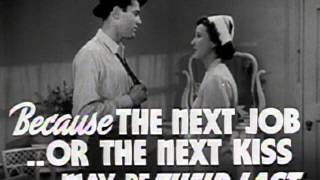 "I never wanted to do nothin' as bad as I want to be a lineman!" To farm boy Slim Kincaid (Henry Fonda), daring death in the electric high wires looks like mighty heroic work. So he shakes the sod off his boots and joins a crew, where a tough lineman (Pat O'Brien) befriends the newcomer -- including introducing him to his best girl (Margaret Lindsay).

There's trouble ahead, on the job and in the heart, in this brawny, rough-and-tumble drama adapted from a popular book by William Wister Haines (Black Legion, Command Decision). The scenario lets Fonda do what he does best: manifest the strength and dignity of the common man. The denouement is sensational, with the two men climbing towers in a blinding blizzard to repair lines "as hot as an electric chair," knowing the slightest misstep means disaster.

Making his debut with Warner Brothers, Henry Fonda plays an apprentice high-voltage lineman working with the no-nonsense, but very experienced Pat O'Brien. Stringing up the high-tension electrical wires on tall metal towers is dangerous work, but from the moment he sees the linemen at work, farm boy Slim (Fonda) knows that this is the job for him. He convinces crew-boss Red Blayd (O'Brien) of this and after heavy-duty training, and the overcoming of a few fears, he starts to work. Tensions arise when Fonda falls in love with Blayd's gal Cally (Margaret Lindsey). Much of the plot was drawn from TIGER SHARK (1932).

Death | Love Triangle | Melodrama | Friendships | Love Triangles | Love
This product is made-on-demand by the manufacturer using DVD-R recordable media. Almost all DVD players can play DVD-Rs (except for some older models made before 2000) - please consult your owner's manual for formats compatible with your player. These DVD-Rs may not play on all computers or DVD player/recorders. To address this, the manufacturer recommends viewing this product on a DVD player that does not have recording capability.

25%off
Crashing Through Danger
$5.95 Spring Sale
Add to Cart