Mojo (Publisher): 4 stars out of 5 -- "Jamaican music as a history of versatile vocalists and one of the most consistent is Freddie McGregor....This debut album was part of the Studio One renaissance..." 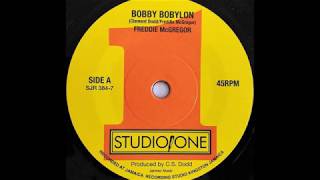 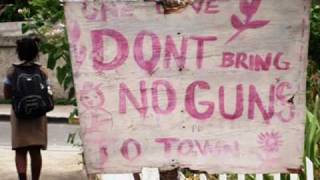 Mojo (Publisher) - p.120
4 stars out of 5 -- "Jamaican music as a history of versatile vocalists and one of the most consistent is Freddie McGregor....This debut album was part of the Studio One renaissance..."

Personnel: Freddie McGregor (vocals).
Although Freddie McGregor began recording for Studio One in the '60s, first as a member of the Clarendonians and subsequently as a solo artist throughout the next decade, producer Coxsone Dodd didn't get around to giving the singer a full-length until 1980. But it was well worth the wait, for Bobby Bobylon was a classic. Half the album updates old singles to great effect and the rest is new, in the Jamaican sense of the word, for the numbers resurrected a clutch of Studio One gems that were revised and given new lyrics. The island's rather unique publishing laws ensured a musical free for all, and a new generation of up-and-coming producers was gleefully and legally plundering the label's archives. Dodd began hitting back in 1979, releasing a stream of exceptional albums built on the back of his old rhythms, Bobby included. The title track is an anthemic masterpiece, so infectious it's amazing that Babylon itself survived its onslaught. "Rastaman Camp" was an equal classic (as was the recut overseen by Niney Holness that McGregor recorded for his eponymous album the year before). The sweet sermon on "Wine of Violence" is nearly as magnificent, as is the sultry "I Am a Revolutionist." The cover of the Ethiopians' "Gonna Take Over Now" is phenomenal, the vocals as sweet and warm as cocoa, the bouncy backing irresistible, while the emotive "Go Away Pretty Girl" is the standout among the lovers numbers. Jamaicans couldn't resist these stellar reworkings of old faves from the rocksteady and early reggae age. McGregor's fabulous sense of melody, rich vocals, and emotive performances both enhanced the lushness of the original melodies and were enhanced by them, the perfect combination. No wonder this album was a hit, and how wonderful that Heartbeat has now reissued it on CD. ~ Jo-Ann Greene

48%off
Freddie McGregor
Anything for You
$6.70 CYBER WEEK
Add to Cart