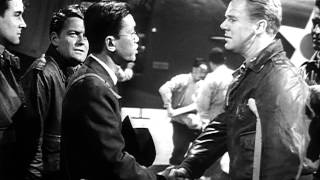 Shortly after the bombing on Pearl Harbor, the American military began preparation for a retaliatory attack. The story of that mission is presented in THIRTY SECONDS OVER TOKYO, based on the memoirs of Captain Ted Lawson, who flew one of the 16 twin-engine bombers over Tokyo. Spencer Tracy plays Colonel Jimmy Doolittle, the leader of the mission, while VAN JOHNSON plays the leading role of Captain Ted Lawson, whose bomber also carries star Robert Mitchum. A variety of factors makes the mission exceptionally dangerous: Twin-engine bombers had never taken off from an aircraft carrier previously; the bombers needed to fly in low, pretending to be Japanese aircraft; and the oversize bombers couldn't return to the aircraft carrier, so the intended landing site was behind enemy lines in China. With its almost documentary-style approach, THIRTY SECONDS OVER TOKYO is perhaps the finest film about World War II made during the war itself.

Pearl Harbor has just been attacked, and the American army plans to retaliate by bombing Tokyo. As the airmen prepare for this dangerous mission, they and their loved ones try to deal with and overcome their fear.

The Bridge on the River Kwai (DVD)
$13.10 Super Savings
Add to Cart