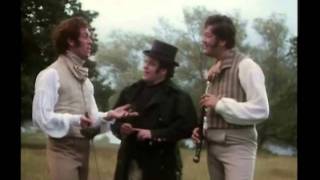 Stephen Fry and Hugh Laurie are best known outside of their native U.K. for the various acting roles they've taken in major productions. In Fry's case, big screen turns in WILDE and PETER'S FRIENDS helped establish his name. In Laurie's case, the hit TV show HOUSE made him a firm favorite with American audiences. They are also known and loved for their joint turn in the irreverent class-based comedy JEEVES & WOOSTER. But U.K. viewers first warmed to their talents at the tail end of the 1980s, with A BIT OF FRY AND LAURIE. The show is comprised of a quick-fire selection of sketches which are interspersed with Fry and Laurie donning various silly guises and being interviewed as if they were ordinary members of the public who have been asked to air their views on a hot topic of the day. The writing and performances are still as fresh as when the shows first aired, and demonstrate both the quick witted nature of the pair and their reluctance to pander to their audience. The entire second season of the hugely influential show is included here.

Bit of Fry and Laurie, A
Only a handful of creative works succeed in capturing the totality of human existence, from birth to death, through love, transfiguration and redemption. "A Bit of Fry and Laurie," the BBC television series co-starring Stephen Fry and Hugh Laurie, has been said, on two occasions, to be among this group. Over 40 sketches in two programs of fun and frivolity.