The Fantastic World of Fellini! 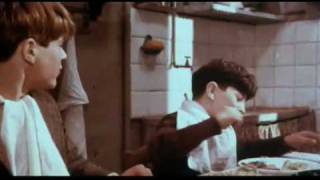 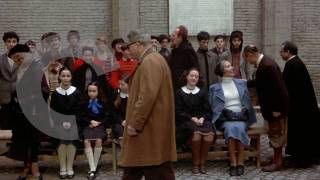 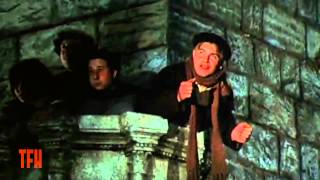 Federico Fellini's AMARCORD, an acclaimed semiautobiographical episodic drama, examines life in a small Adriatic village just before Mussolini's reign in the 1930s. As the weather changes and spring arrives, the village holds a festival in which it burns a symbolic bonfire and celebrates new life. This gathering in the central square is the first of many others throughout the film. Each time the community assembles, its colorful members show themselves in full force, boasting their bizarre, disjointed personalities--and pure mischief is the result. Several of the village ladies wear their eyebrows penciled on in high, provocative arches, a style that seethes sex and drama, coaxing the camera to follow them. The film takes on a circusy, chaotic tone, making it difficult to see a clear plot structure; AMARCORD instead breaks up into several memorably surreal sequences, a few of which follow a young man named Titta (Bruno Zanin) who wanders in and out of the animated provincial landscape, meeting assorted crazy characters and obsessing over sex. The beautiful clashes with the grotesque and politics and family matters blend together while sex is offset by violence in the inimitable style of Italy's late master of cinema, whose tour de force won an Oscar for Best Foreign Language Film.

Fellini's sentimental yet scathing look at a small town near Rome during the prewar years. Told in several recurring episodes, the story features a teenage boy (who represent the director himself), his parents, his lascivious grandfather, a dizzy hairdresser in search of her "Gary Cooper," a mad uncle who straddles a tree demanding sex, and other colorful, odd characters. With the nostalgic tone of one's memories, the film stresses a series of episodes over a strict plot structure, and is masterfully handled by the flamboyant director. The film won an Oscar for Best Foreign Language Film.