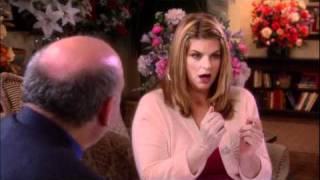 Kirstie Alley's loving send-up of the absurdities of Hollywood stars the former CHEERS actress as a character similar to her real-life persona. A successful actress trying to deal with the vagaries of the industry, Kirstie searches for love and success in the often cruel and superficial milieu of the film industry. A hybrid of sitcom and reality TV, most of the series is unscripted, taking plotlines from Kirstie's life and improvising the rest. Much of the show concerns itself with the negative image that has been built up around Kirstie's weight gain, and the difficulties of finding work and acceptance in the industry when one is not a svelte size three. To stay sane, she is armed with her buoyant personality and quick wit, as well as a couple of allies: Eddie (Bryan Callen), Kirstie's assistant with Hollywood dreams of his own, and Kevyn (Rachael Harris), Kirstie's stylist who works hard to guide Kirstie in her quest to look good. Guest stars are also in plentiful supply, with a lineup that includes Kid Rock, Carmen Electra, Merv Griffin, Kevin Nealon, Mark Curry, John Travolta, Kelly Preston, and many more.