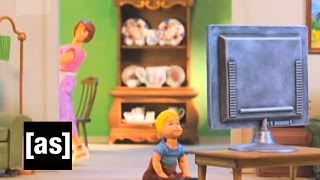 Ostensibly about a dead chicken reanimated by a mad scientist and forced to watch endless bad television, ROBOT CHICKEN actually exists as a madcap exercise in cramming as many inane pop-culture references, gags, and juxtapositions into a 11-minute time period as is humanly possible. Created by actor Seth Green (AUSTIN POWER, THE FAMILY GUY, BUFFY THE VAMPIRE SLAYER) and ToyFare editor Matthew Senreich (the two met and bonded over their mutual love for action figures and collectible figurines), the Cartoon Network show uses stop-action animation and a host of dolls and action-figures to perform outrageous send-ups of television, film, and postmodern America. The premises are zany and zip by with supersonic speed: The Batmobile races the General Lee in "3 Fast 3 Furious," a teeny-bobber gets a fashion makeover in "Pimp My Sister," and Michael Jackson returns from space to expose his evil alter ego in "Where's Michael." This release contains all 20 episodes from the show's first season, with such guest star voice-actors as Scarlett Johansson, Burt Reynolds, Ryan Seacrest, Mark Hamill and Macaulay Culkin.