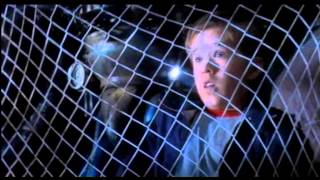 A.I. ARTIFICIAL INTELLIGENCE is the story of David (Haley Joel Osment), the first mecha (a futuristic term for a mechanized human being) designed with the ability to love. A couple whose son is in a coma "adopts" David to help them recover from their loss. Naturally, things do not go as planned, and David is forced to leave the mother (Frances O'Connor) he's been "imprinted" to love, and make his way in the world. Traveling with Teddy, a hi-tech stuffed bear, David escapes the Flesh Fair, where angry humans destroy mechas to "purge artificiality," and unexpectedly befriends Gigolo Joe (Jude Law in a wry performance), a robot designed to pleasure women. Joe agrees to help David in his quest to become human.

Director Stanley Kubrick originally developed A.I., at one point asking Spielberg to direct it. When Kubrick passed away, Spielberg took the reins. Using a treatment and thousands of drawings commissioned by Kubrick, Spielberg wrote his own screenplay (his first since 1979's CLOSE ENCOUNTERS OF THE THIRD KIND). Osment, perhaps the only pre-teen actor who can effectively convey existential angst, gives a marvelous performance, helping Spielberg create a gorgeous futuristic fairy tale that questions the very nature of what we call life.