It takes a legend... to make a star 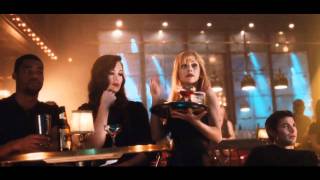 Box Office - 11/24/2010
3 stars out of 5 -- "[With] stunning, high-energy musical numbers....During the musical numbers, Aguilera and Cher are equally captivating..."
Los Angeles Times - 11/24/2010
"[BURLESQUE] is a safe place for Aguilera to show off her song and dance chops. And that she does, belting out bluesy songs left and right, many inspired by that smoldering torch queen Etta James..."
A.V. Club - 11/23/2010
"BURLESQUE delivers exactly what it promises, and then some: It's a glittering neon valentine to divadom..." -- Grade: B-
Movieline - 11/24/2010
"The first hour or so of BURLESQUE is good enough to eat with a spoon. It's completely honest about its frothy, heavily sequined ambitions..."
Total Film - 12/12/2010
3 stars out of 5 -- "BURLESQUE is an unashamed theatrical artifice proudly wearing its camp heart on its sequinned sleeve."
Empire - 12/17/2010
3 stars out of 5 -- "The music and dance are thrilling and the costumes saucy enough to satisfy..."

Christina Aguilera makes her dramatic feature debut as Ali, a small-town singer who takes her shot at stardom performing at a neo-burlesque nightclub in Los Angeles. Situated in a regal old theater that's still dazzling despite having fallen into disrepair, The Burlesque Lounge is the kind of club where legends are born. When club owner Tess (Cher) hires charismatic Ali as a cocktail waitress, the ambitious big-city newcomer goes to great lengths to make a good impression. Taken under the wing of a friendly featured dancer (Julianne Hough), Ali quickly realizes that not everyone is quite as nice when she forms a friendship with bartender/aspiring musician Jack (Cam Gigandet) and incurs the wrath of the club's cattiest showgirl (Kristen Bell). After making her leap to the stage with a little help from a sympathetic stage manager (Stanley Tucci) and the club's playfully androgynous host (Alan Cumming), Ali becomes the star attraction at The Burlesque Lounge, and the crowds start packing in. Later, a wealthy businessman (Eric Dane) makes a bid for the club while trying to charm the talented young performer straight into his arms.