184K ratings
Currently Out of Stock: We'll get more as soon as possible
Notify Me When Available
Add to Wishlist
Format:  DVD
sku:  XRI 14365D
Also released as:
Roman Holiday for $6.50
Our customers love us! 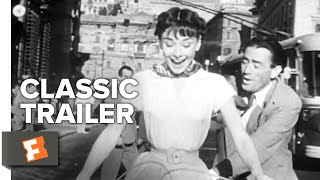 This classic romantic comedy introduced Audrey Hepburn to audiences as a modern-day princess. Stifled by her royal entourage on a trip to Rome, Hepburn's Princess Ann escapes to explore the Italian city on her own. While incognito, she falls in love with an American newspaperman, Joe Bradley (Gregory Peck). When Bradley learns of Ann's true identity, he finds himself torn between following his nose for news--and turning her into a big story--or the growing affections of his heart. A hit in 1953, ROMAN HOLIDAY won Hepburn an Academy Award for Best Actress, and was also notable for its Oscar-winning story by then-blacklisted Dalton Trumbo (credited as Ian McLellan Hunter).