Behind every great martial artist lies a teacher. 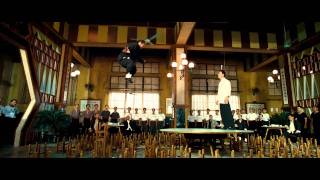 Hong Kong film star Donnie Yen reprises his role as Ip Man in this semi-autobiographical sequel following the adventures of the grand master of Wing Chun. The Sino-Japanese War has ended, and after defending his people with wushu, Ip escapes the wrath of the Japanese by fleeing to Foshan. Failing to find peace even in his own homeland, Ip relocates his family to Hong Kong in 1949. Once there, Ip begins teaching Wing Chun to a group of pupils that includes Wong Leung (Huang Xiao Ming), who soon clashes with Cheng Wei Ki (Dennis To). Embarrassed at having been beaten so badly by Wong in a fight, Cheng kidnaps his rival and takes him to a fish market owned by Master Hung (Sammo Hung). Blaming Ip for the damage done by Wong, Master Hung demands that the other teacher defeat practitioners of all wushu varieties in the time it takes to burn a single joss stick. Incredibly, Ip meets the challenge, impressing Master Hung, who then gives him permission to open his own wushu school. When Master Hung gives Ip a ticket to the King of Boxing Competition, a friendship is forged between the two former rivals. After a competitor nicknamed Twister is named the winner, he beats Cheng and friends for celebrating with wushu, and claims he can defeat Master Hung with three simple blows. Though Master Hung maintains the upper hand throughout most of the fight, Twister eventually lands a punch that knocks his superior down. In the wake of the fight, tensions between the locals and Westerners begin heating up, and the local superintendent responds by announcing a kung fu competition. When Ip defeats all challengers, including Twister, Wing Chun gains popularity throughout Hong Kong, and the highly respected master begins teaching a young disciple named Bruce Lee, who will bring the art of Chinese wushu to Westerners before dying tragically at the tender age of 32.