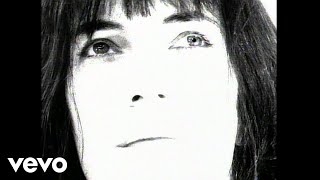 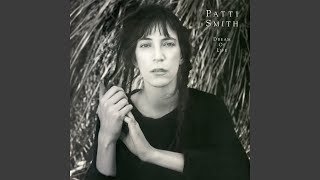 The 1996 remastered CD version of DREAM OF LIFE contains two additional tracks, "As The Night Goes By" and "Wild Leaves."
Personnel: Patti Smith (vocals); Fred Sonic Smith (guitar); Margaret Ross (harp); Jesse Levy (cello); Richard Sohl (keyboards); Gary Rasmussen, Kasim Sultan, Bob Glaub, Malcolm West (bass); Jay Dee Daugherty (drums); Hearn Gadbois, Sammy Figueroa, Crusher Bennett (percussion); Robin Nash, Andi Ostrowe (background vocals).
Producers: Fred Smith, Jimmy Iovine.
Engineers include: Jay Healey, Thom Panunzio, Kevin Killen.
Recorded at The Hit Factory, New York, New York; A & M Studios, Los Angeles, California and The Disc, Ltd., East Detroit, Michigan.
Patti Smith had withdrawn from the world of rock after 1979s WAVE. When DREAM OF LIFE appeared in 1988, she had a new guitarist and husband in former MC5 guitarist Fred "Sonic" Smith, and a smoother sound that abandoned WAVE's slickness. Though pigeonholed as disappointing on its initial release, DREAM OF LIFE is, in retrospect, a solid album with a lot to recommend it.
The album opens with the punchy "People Have the Power," the sort of song that could have easily fallen into awkward nanvetT in lesser hands. However the song is a triumphant call to arms, featuring Smith's raspy, commanding vocals, with crisp drumming from Jay Dee Daugherty, and some spiky guitar work. Also of note is "Where Duty Calls," an analysis of the political situation in the Middle East that occasionally recalls Warren Zevon, though without that artist's knowing humor. "Looking for You (I Was)," is a straight-ahead pop song built on subtle hooks and Smith's literate lyrics, while "The Jackson Song" is an achingly pretty lullaby.