MGM brings on the show with music - dancing - Technicolor 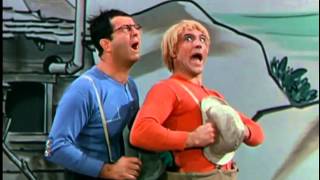 There's an unusual harvest at Falbury Farm: beans, hay...show tunes. It's a bumper crop, too, with Judy Garland and Gene Kelly leading all the hoofing, singing and sparking. In her final MGM musical, Garland plays Jane Falbury, a farm owner more than a bit riled when her aspiring-actress sister (Gloria DeHaven) shows up with a theatrical troupe that wants to stage a musical in the family's barn. Any guess who becomes the show's sudden star after its lead runs off with a Broadway actor? Highlights include Kelly's shuffle-and-squeak "You, Wonderful You" dance solo making use of loose boards and newspaper on the floor, tuxedo-topped Garland's leggy, joyous "Get Happy" and a Kelly/Phil Silvers country-bumpkin bit of "Heavenly Music" backed by woofing canines. After a show like this, how're you gonna keep these kids down on the farm.

Farm folk interact with city slickers who come to their sleepy community to rehearse a play. As a bonus, this tape contains Garland's first effort for MGM, the minimusical "Every Sunday" - directed by Felix E. Feist.

Summer Stock
An entrepreneur tries to turn a New England farm into a theatre.

A farm girl brings a band of aspiring actors back to the homestead, where they proceed to use the barn as a "theater" for their new musical. This intrusion displeases the farm girl's older sister -- who owns the land -- but when the eager thespians agree to help her harvest the year's crop, the female farmer acquiesces. Later, the younger sister decides to depart for New York, leaving the lead role available. And just one person knows how to fill her shoes...