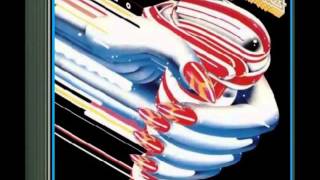 Judas Priest: Rob Halford (vocals); Glen Tipton, K.K. Downing (guitar); Ian Hill (bass); Dave Holland (drums).
Principally recorded at Compass Point Studios, Nassau, Bahamas in 1986. Includes liner notes by Judas Priest.
Digitally remastered by Jon Astley.
After seeing the chart success that such acts as Van Halen and Motley Crue were enjoying with their melodic hard rock sound, Judas Priest decided to give it a shot with their 1986 release, TURBO. While it performed respectably on the charts, TURBO wasn't the big smash Priest hoped for, and it left many longtime fans puzzled as to the whereabouts of the old lethal Priest.
The presence of synthesizers can be heard throughout the album, while such tracks as the opening "Turbo Lover," "Locked In," and "Parental Guidance" would prove to be highlights. The band would subsequently wisely return to their familiar ultra-metal direction.

Judas Priest
Ram It Down
$9.10 CD Sale
Add to Cart