The Night of the Iguana PG

14K ratings
Currently Out of Stock: We'll get more as soon as possible
Notify Me When Available
Add to Wishlist
Format:  DVD
sku:  J2G6
Our customers love us! 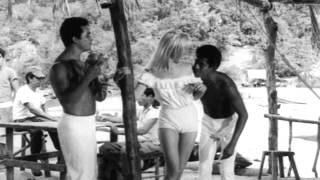 In a remote Mexican seacoast town, a fallen Episcopal priest struggles to pull his shattered life together. And three women - an earth hotel owner, an ethereal artist and a hot-eyed, willful teenager - can help save him. Or destroy him. With an outstanding cast headed by Richard Burton, Ava Gardner and Deborah Kerr, direction by legendary filmmaker John Huston and a steamy screenplay based on Tennessee Williams' acclaimed stage play, The Night of the Iguana pulses with conflicting passions and a surprising edge of knowing humor. Winner of one Academy Award and nominated for three more, the film explores the dark night of one man's soul - and illuminates the difference between dreams and the bittersweet surrender of reality.

A turbulent masterpiece adapted from the play by Tennessee Williams. A defrocked clergyman-turned-tour-guide takes a busload of pious Texan church ladies to an Eden-like spot along the coast of Mexico where he battles their suspicions about his past, his own demons, and a young girl whose affections could destroy him. Ava Gardner crackles as the woman who tries to keep him from being torn in two by heaven and earth. Academy Award Nominations: 4. Academy Awards: Best (black-and-White) Costume Design.

Night of the Iguana
In the sleepy village of Puerto Vallarta, the defrocked Reverend T. Laurence Shannon works as a tour guide. While leading a group of school teachers, he attracts the attention of their junior member Charlotte Goodall. To save money, he takes the group to a rundown hotel owned by his friend, Maxine Faulk. Once there, his interest shifts to Hannah Jelkes, a poor artist. But in the end it may be Maxine whom he stays on with.

Residing is a small hotel on the west coast of Mexico, Reverend T. Lawrence Shannon, a defrocked Episcopal preacher, hides from his lecherous past. He finds work as a tour guide for a group of American teachers, but soon comes under criticism from their prudish leader when an 18 year-old in her care starts lusting after him. Shannon also receives a good deal of attention from the seductive hotel owner. He spends most of his time, however, with an idealistic spinster and her 97 year-old grandfather. This wheel chair-bound poet claims that he will expire upon the completion of his final manuscript -- a literary endeavor he has been laboring on for the last twenty years.