Because of Winn-Dixie PG 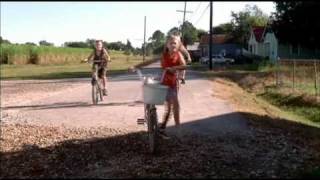 Because Of Winn Dixie Trailer HD

Disc 1/Side A: BECAUSE OF WINN-DIXIE - Full Frame Version

Disc 1/Side B: BECAUSE OF WINN-DIXIE - Widescreen Version

Newcomer AnnaSophia Robb is adorable as India Opal Buloni in Wayne Wang's heartwarming family comedy BECAUSE OF WINN-DIXIE, based on the bestselling novel by Kate DiCamillo. A smart, resourceful young girl, Opal thinks "people forgot how to share the joy." She's tired of moving from small town to small town with her father (Jeff Daniels), a preacher at the Open Arms Baptist Church; she just wants to find a home and stop being lonely. One night she wishes for a best friend, and that companion arrives in the form of a magical, trouble-causing dog she comes upon in a Winn-Dixie supermarket. She names the dog Winn-Dixie, and they become inseparable, making friends with many of the town's most unusual, quirky characters, including gruff and scruffy Otis (singer-songwriter Dave Matthews), who carries around his guitar and works at the rather unique Gertrude's Pet Shop. Academy Award winners Eva Marie Saint (as Miss Franny the librarian) and Cicely Tyson (as the mysteriously daffy but charming Gloria Dump) provide excellent support as well. Among the musicians on the infectious pop soundtrack are Emmylou Harris, Shawn Colvin, the Beu Sisters, the Finn Brothers, and Leigh Nash, whose "I've Gotta See You Smile" will make audiences do just that. With BECAUSE OF WINN-DIXIE, Hong Kong-born Wang continues his successful transition to English-language family films following such acclaimed early Chinese works as CHAN IS MISSING, DIM SUM, and EAT A BOWL OF TEA.

The Girl Who Played With Fire (DVD)
$5.40 Super Savings
Add to Cart