Far from Home: The Adventures of Yellow Dog PG 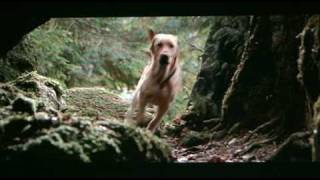 Far From Home: The Adventures of Yellow Dog (1995) theatrical trailer

A family adventure and classic boy-and-dog tale, FAR FROM HOME follows young Angus (Jesse Bradford), and the deep friendship he shares with his adopted Labrador, Yellow. Living an idyllic life in rural Canada, Angus's world is turned upside down when a boating trip with his father ends in disaster. Stranded and lost in the Canadian wilderness, Angus and Yellow must get by on their wits, while Angus's frantic parents (Mimi Rogers and Bruce Davidson) search desperately for their son. The heartwarming, harrowing saga plays out against a gorgeous Canadian backdrop of mountains, forests, and secluded lakes.

When teenager Angus McCormick finds a Labrador Retriever, he names the pooch "Yellow" and brings him home. Soon after, Angus and his dad go on a boating trip, taking the boy's newfound friend with them. But a violent storm strikes, capsizing the boat, and Angus and Yellow drift to shore alone. The pair find themselves stranded in the wilderness for weeks on end with only limited supplies. As the family searches for them, Angus and his dog travel through the woods using rugged survival instincts to stay alive -- but their trek is made even more difficult when Angus breaks his arm. Will this troubled pair last long enough to make it back home'

Where The Red Fern Grows
$6.10 Super Savings
Add to Cart