Every day a battle is born. 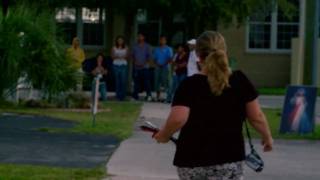 12TH AND DELAWARE visits a street corner in Ft. Pierce, Fla. that is ground zero for the ferocious abortion - rights battle. On one side of the intersection stands A Women's World, an abortion clinic; across the street is the Pregnancy Care Center, a pro - life outpost dedicated to heading off would - be abortion seekers at the pass. With unprecedented access to both sites, the film provides an eye - opening look at the ideological trench warfare that takes place daily there. Directed by Heidi Ewing and Rachel Grady.

The two sides of the abortion debate in America literally face one another in this documentary from filmmakers Heidi Ewing and Rachel Grady. In Fort Pierce, Florida, a women's heath care center is located at the corner of 12th and Delaware. On the same corner, across the street, is another women's heath care center. However, the two centers are not in the same business; one provides abortions along with a variety of other health services, while the other primarily offers counseling to women considering abortion, urging them to keep their babies. In 12TH AND DELAWARE, Ewing and Grady offer a look inside both offices, as pro-life counselors give women a mixture of concern and disinformation about terminating their pregnancies and the pro-choice medical staff struggles to work under the frequent threat of violence against them. The film also examines the handful of protesters who stand outside the abortion clinic, confronting both patients and staff as they enter and exit. Produced for the HBO cable network, 12TH AND DELAWARE received its world premiere at the 2010 Sundance Film Festival.

Social Issues | Deception | Documentary
This product is made-on-demand by the manufacturer using DVD-R recordable media. Almost all DVD players can play DVD-Rs (except for some older models made before 2000) - please consult your owner's manual for formats compatible with your player. These DVD-Rs may not play on all computers or DVD player/recorders. To address this, the manufacturer recommends viewing this product on a DVD player that does not have recording capability.