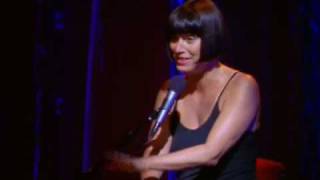 The Vagina Monologues, created and performed by Eve Ensler, debuted off - off - Broadway in 1996. This controversial work soon rode a wave of national acclaim and continues to be performed in North America and around the world. It has been translated into 14 different languages and performed in over 30 different countries.

Now the intimacy of Eve Ensler's original show has been lovingly brought to the screen. The Vagina Monologues captures Eve's unique performance of her work and travels beyond the stage. She explores the creative impetus behind the monologues and conducts a series of new and revealing interviews as inspiring as those that brought about the original work.

Writer and performer Eve Ensler created a one-woman show that she began performing off-off-Broadway in 1996. Her show, THE VAGINA MONOLOGUES, spoke of women's bodies covering subjects often considered taboo, risque, and threateningly empowering. The show was a revelation which would become one of the most popular theater pieces of its time. This performance is an intimate look into Ensler's original run of the show. Also included are interviews which give insights into the birth of this incredibly popular theater phenomenon.

Racy | Social Issues | Satire | Women | Sexuality | Live Performances
This product is made-on-demand by the manufacturer using DVD-R recordable media. Almost all DVD players can play DVD-Rs (except for some older models made before 2000) - please consult your owner's manual for formats compatible with your player. These DVD-Rs may not play on all computers or DVD player/recorders. To address this, the manufacturer recommends viewing this product on a DVD player that does not have recording capability.

60%off
Native America: Tales of a Proud Nation
$9.98 Spring Sale
Add to Cart