Up is down, black is white, and nothing is what it seems. 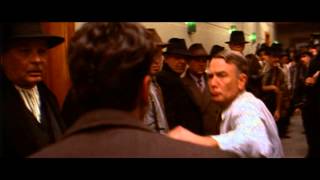 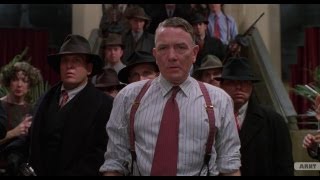 "Intimidating helpless women is part of my job." -- TOM
(Gabriel Byrne) to Verna in a women's room
"Then why don't you find one and intimidate her."
- VERNA (Marcia Gay Harden)

An Irish gangster (Albert Finney) and his trusted lieutenant (Gabriel Byrne) and counselor find their domination of the town threatened by an ambitious Italian underboss (Jon Polito). Just as this threat erupts, the two sever their friendship when they realize that they love the same woman (Marcia Gay Harden). When one joins ranks with the enemy, a bloody gang war erupts. Violent and compelling work from the Coen brothers.

In 1929, Tom Reagan is the intellectual right-hand man to Leo, one of the city's political bosses. Leo is being harassed by gangster Johnny Caspar to kill Bernie Bernbaum, who is cutting into his action, but Leo refuses because of his love for Bernie's sister, Verna. Unfortunately, Tom is also in love with Verna, and the feelings that both men have for her will lead to a gang war that threatens to destroy them all.

The Adventures of Robin Hood
$12.60 Super Savings
Add to Cart

25%off
The Gospel According to St. Matthew TOP 25 Bestselling DVD
$5.95 on Sale
Add to Cart