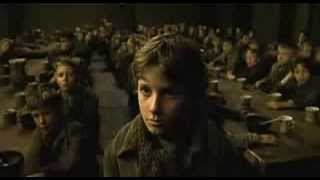 Acclaimed director Roman Polanski turns a dark eye toward the classic Charles Dickens novel OLIVER TWIST, about a charming orphan boy (Barney Clark) whose life seems to depend solely on the whims of fate. Abandoned early in life, Oliver first seems doomed to life in a workhouse, where he is farmed out to a local undertaker where he regularly is underfed and mistreated. Hoping to improve his lot in life, Oliver runs away to London, where he falls in with a gang of petty criminals led by the fence Fagin (Ben Kingsley) and the young pickpocket the Artful Dodger (Harry Eden). His new situation seems like relief, until he meets Mr. Brownlow (Edward Hardwicke), who sees Oliver's true character and potential and seems determined to sway destiny.

Despite his innocent performance, eleven-year old Barney Clark was already a seasoned professional when Polanski recruited him to play Oliver, including studies at the Anna Scher Theatre and performances in the film THE LAWLESS HEART and British television dramas FOYLE'S WAR and THE BRIEF. Also of note is the moving score by award-winning composer Rachel Portman, which brings to life the gritty life of Victorian London. Polanski can now add OLIVER TWIST to his array of classic films, including THE PIANIST and CHINATOWN, which forever will shape cinematic vision.