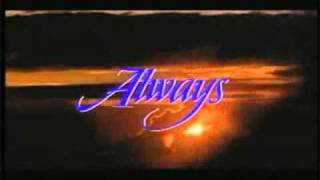 This remake of the 1943 film A GUY NAMED JOE stars Richard Dreyfuss as Pete Sandich, a daredevil pilot who specializes in putting out forest fires. Pete promises his girlfriend, Dorinda (Holly Hunter), that he will stop flying, but when his best friend, Al (John Goodman), gets into engine trouble while fighting a blaze, Pete attempts a daring rescue--saving his friend but killing himself. Waking up in the afterlife, Pete meets an angel, Hap (Audrey Hepburn), who sends him back to earth as a ghost no one can see or hear. When Dorinda flies into a fire to save trapped smoke jumpers, Pete telepathically talks her through the dangerous mission. Hap tells Pete he must help Dorinda overcome her grief and lead her to a new love with a novice pilot (Brad Johnson). While Pete watches the two start their romance, he battles feelings of jealousy and sadness at giving her up. Steven Spielberg and Richard Dreyfuss, while working together on JAWS in 1975, found that they shared an affinity for the 1943 film A GUY NAMED JOE. They managed to come together years later to make their own version of it in ALWAYS.