She brought a small town to its feet and a huge corporation to its knees. 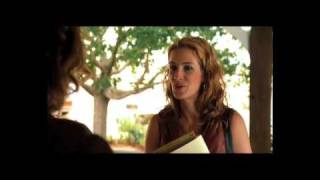 "I'm smart, I'm hardworking, and I'll do anything. And I'm not leaving here without a job."
- Erin Brockovich (Julia Roberts) to Ed Masry (Albert Finney)
"Don't be too nice to me."--Erin
"Why'"--George (Aaron Eckhart)
"Makes me nervous."
- Erin
"What makes you think you can just walk in there and find, uh, what we need'"--Ed
"They're called boobs, Ed."
- Erin

Julia Roberts reaffirms her superstar status with ERIN BROCKOVICH, an inspirational drama that is based on a true story. Roberts plays Erin Brockovich, a twice-divorced mother of three who is struggling to remain afloat. After she is involved in a car accident, she loses what should have been a lucrative settlement. Jobless and pressured, Erin convinces the attorney from her case, Ed Masry (Albert Finney), to hire her as a lawyer's assistant. She also befriends her neighbor George (Aaron Eckhart), a sexy biker whose dedication to her children appears too good to be true. As Erin settles into her job, she convinces Ed to let her pursue a case that involves the residents of a local community. Apparently, several of the townspeople have become sick with cancer and other diseases. The more that Erin investigates, the more sure she becomes of the guilt of Pacific Gas & Electric Company, an incredibly powerful corporation. Steven Soderbergh shoots BROCKOVICH with a flashy realism that allows Roberts to shine every second she appears onscreen.

The Hand That Rocks the Cradle (DVD)
$5.80 Super Savings
Add to Cart