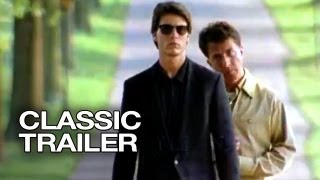 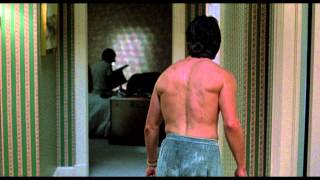 Callous hustler Charlie Babbitt (Tom Cruise) is busy working on his next deal when he receives word that his estranged father has died. After traveling back to Ohio from Los Angeles for the funeral, Charlie is miffed to find that although he will receive a vintage Buick from his father's estate, he isn't getting a cent of the three-million-dollar fortune. Instead, Charlie finds that the money has been left to the caretakers of his institutionalized autistic brother, Raymond (Dustin Hoffman). Once he gets over the shock of the existence of a brother of whom he seems to have no recollection, Charlie kidnaps Raymond and heads cross-country in the Buick in an attempt to get a cut of the inheritance to pay off some of his failing deals. However, during their adventure, Charlie not only learns how to deal with Raymond's many idiosyncrasies, but he also actually begins to care about his older brother, surprising even himself with his ability to love and his realization that money isn't necessarily the most important thing. Barry Levinson directs Ron Bass's script with impeccable timing and a wonderful sense of humor.

After their father dies, a smooth-talking businessman is reunited with his autistic older brother to whose caretakers his father left a fortune. Needing the money himself, he kidnaps him for a rocky cross-country drive only to discover the void his brother had filled in his empty childhood.