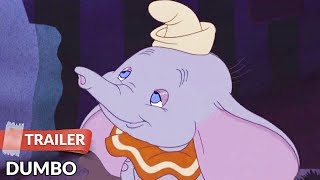 "That's it! Dumbo, you flew! Boy, am I stupid; why didn't I think of this before'! Your ears--they're perfect wings! The very things that held you down are gonna carry you up, and up, and up!"
- Timothy Mouse (voice of Edward Brophy)

Deceptively simple, beautiful, moving, and hilarious, DUMBO is often overlooked when considering Disney's greatest films because perhaps of its lack of extravagance, its brief running time, and its simple story. Baby elephant Jumbo Jr. is delivered by the stork to his elephant mom with much fanfare but soon receives a cold shoulder from the snobby female pachyderms and the rest of the circus due to his oversize ears. When his mother goes on a rampage in order to protect him from some snickering rubes, she winds up locked away. Dumbo is left without a friend in the world until the street-smart Timothy Mouse decides to become his manager and a telephone line full of delightful jive-talking crows convince him he can fly. Highlights include Dumbo accidentally getting drunk and experiencing the surreal musical sequence "Pink Elephants on Parade" and a soundtrack packed with such priceless songs as the Oscar-winning "Baby Mine" and the crow's soulful number, "When I see an Elephant Fly." There's nary an imperfect moment to be found in this raucous, tender, sublime film, which has been delighting audiences for generations.

In this classic animated Disney film, a baby circus elephant is cruelly mocked until he realizes that his enormous ears are a blessing in disguise: He can fly. Soon Dumbo becomes the greatest show on earth.