When friendship runs deeper than blood 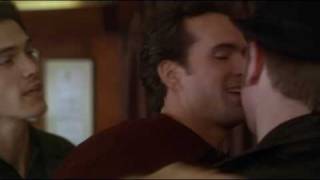 Tommy, John, Michael, and Shakes are four young teenage punks growing up in the streets of Manhattan's Hell's Kitchen in the mid-1960s. When these four friends pull a prank that that goes awry, they find themselves serving time at the Wilkinson School for Boys, where they are repeatedly and sadistically violated and tortured by four guards--the most menacing being Noles, portrayed by Kevin Bacon. Fifteen years later, the foursome is still dealing with the emotional repercussions of their abuse. Tommy (Billy Crudup) and John (Ron Eldard) have become common criminals, and when they spot Noles in a local watering hole they can't pass up the chance for revenge. It's up to Shakes (Jason Patric), a low-profile newspaper employee, and Michael (Brad Pitt), a lawyer with the district attorney's office, to save their friends while keeping the details of their tortured childhoods secret. Dustin Hoffman appears as Danny Snyder, and Robert De Niro stars as Father Bobby, the local neighborhood priest who is as comfortable on the streets or in a bar as he is behind the pulpit. Based on the allegedly true story by Lorenzo Carcaterra, the film is directed by Barry Levinson (DINER, RAIN MAN).

When a mischievous prank goes awry, a group of Hell's Kitchen juveniles are sent to a reform institution, where they experience brutal sexual assaults by the sadistic "caretakers." Two decades later, a pair of the now-grown victims spot their chief tormenter and decide to exact revenge.