Rush Week at this college just got a lot more dangerous. 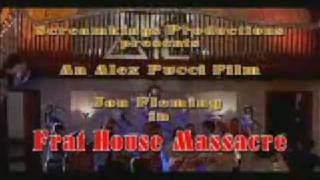 From the creators of CAMP SLAUGHTER comes FRAT HOUSE MASSACRE, a true homage to the best of the late 70's grindhouse and early 80's slasher films! Sean (Chris Prangley) and his little brother Bobby (Rane Jameson) thought joining the Delta Iota Epsilon fraternity would be the best time of their lives with parties, freedom, girls and sex. The fraternity president Mark (Jon Fleming of TVs WILL & GRACE and DANTE'S COVE), however, is a little strange. His twisted hazing rituals include extreme physical and mental torture that lead the boys down a horrific path of destruction and death. But death may be just the beginning, as this gritty twisted film unfolds. Inspired by actual events and set in the year 1979, FRAT HOUSE MASSACRE is a disturbing journey through the twisted world of fraternity boys, pledges and the not-so-innocent sorority sisters swept up in their madness. Loaded with violence, gore, nudity and a fantastic music score by Claudio Simonetti, this DVD is the director's cut containing over twenty minutes of additional footage.

CAMP SLAUGHTER director Alex Pucci takes the helm for yet another big screen bloodbath, this time venturing into wild world of depraved Greeks, twisted pledges, and sinful sorority sisters. Inspired by actual events, FRAT HOUSE MASSACRE opens in 1979, when college debauchery was at an all-time high. As the disco beat throbs and the cocaine flows freely, the stage is set for some hardcore collegiate carnage.