The past never dies. It kills. 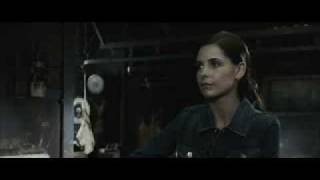 In 2001 British director Asif Kapadia's debut feature, THE WARRIOR, a lyrical, beautiful movie set in the Himalayas, was named Best British Film at the BAFTA Awards. For his second film, Kapadia headed to Hollywood for the suspenseful horror flick THE RETURN, written by first-time screenwriter Adam Sussman. Sarah Michelle Gellar stars as Joanna Mills, an aggressive young woman who works as a successful saleswoman in the trucking industry. She pushes hard to go after a big deal in Texas, even though she had previously deemed the state off limits--something that happened to her when she was a little girl has kept her away from her hometown for many years. Filled with fear, trepidation, and determination, she goes back to Texas, even visiting her estranged father (Sam Shepard). As she sees familiar places, she has frightening flashes of deja vu, remembering bits and pieces of a tragic incident involving an ex-con (Peter O'Brien), an unseen man, and a bad traffic accident. The visions haunt her dreams, sending her back to her childhood (where she's played by Darrian McClanahan). Reunited with an old friend (Kate Beahan), Joanna tries to move forward, but her unfinished past keeps dragging her back. Kapadia keeps things at a slow, suspenseful pace, every scene adding another piece of the plot--as well as a touch more mystery. Gellar, who has also starred in such horror films as THE GRUDGE, I KNOW WHAT YOU DID LAST SUMMER, and SCREAM 2, plays Joanna with an involving sense of dread that is echoed by Dario Marianelli's score.