Sherlock Holmes and Dr. Watson are on the trail of a femme fatale who will stop at nothing, including murder, to track down a set of mysterious music boxes. 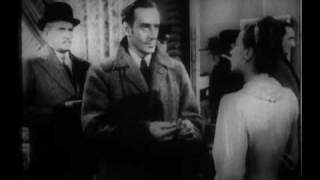 The master detective (Basil Rathbone) and his companion Dr. Watson (Nigel Bruce) become enmeshed in a case of murder involving a series of music boxes which harbor some strange significance. The twisting and turning trail leads Holmes to the maker of these precious musical objects, a man behind bars. A group of thugs headed by the seductive Hilda Courtney (Patricia Morison) is willing to kill to acquire them. Holmes must resist the devilish femme-fatale in his race to uncover the clues that will solve the mystery and put the underworld mob out of business.

Dressed To Kill, the final film in the long-running Basil Rathbone-Nigel Bruce series which began in 1939, was directed by Roy William Neill also noted for such movies as Frankenstein Meets the Wolf Man, The Black Room and other Universal Sherlock Holmes films.

Super sleuth Sherlock Holmes (Basil Rathbone) investigates the deaths of two random individuals--including Dr. Watson's old friend Julian "Stinky" Emery (Edmond Breon)--found murdered after purchasing identical music boxes from an auction house in London. Tracing the items back to a prison inmate who stole a series of printing plates from the Bank of England, Holmes begins to suspect the music boxes reveal a secret code to the hidden loot's whereabouts. It's a nailbiting race against time as Holmes tangles with a murderous gang led by the formidable Hilda Courtney (Patricia Morison) in his attempt to recover the last of the three boxes and decipher its hidden secrets. DRESSED TO KILL marks the 14th and final time Rathbone would star as the master detective.

19%off
The Hound of the Baskervilles
$16.20 Super Savings
Add to Cart

The Adventures of Sherlock Holmes
$18.70 Super Savings
Add to Cart

Sherlock Holmes and the Woman in Green
$14.50
Add to Cart

Sherlock Holmes and the Woman in Green
$10.90
Add to Cart

Sherlock Holmes and the Woman in Green
$10
Add to Cart