Jonathan Swift's famous book is presented in this beautifully animated family classic that will please children of all ages. 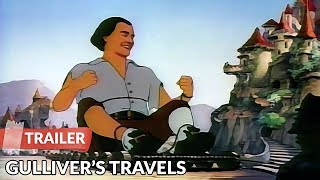 1939's Animated Children's Classic! Jonathan Swift's satire Gulliver's Travels comes to remarkable life in this classic animated feature. Shipwrecked by a storm at sea, Lemuel Gulliver washes up on the shores of Lilliput, where the citizens are no taller than his thumb. When he's discovered asleep on the beach by the town crier, Gabby, scores of the Lilliputians flock to the the beach to tie up and secure the sleeping "giant." In the fantastic adventures that follow, Gulliver finds himself mediating the feud between Lilliput's King Little and Blefuscu's King Bombo. Produced by Max Fleischer and directed by his brother Dave Fleischer over a period of 20 months, Gulliver's Travels required the work of over 700 artists and was honored with two Academy Award nominations in 1939 - Best Score (Victor Young), and Best Song ("Faithful Forever", music and lyrics by Ralph Rainger and Leo Robin).

Adventure | Classic | Fantasy | Recommended | Essential Cinema
This product is made-on-demand by the manufacturer using DVD-R recordable media. Almost all DVD players can play DVD-Rs (except for some older models made before 2000) - please consult your owner's manual for formats compatible with your player. These DVD-Rs may not play on all computers or DVD player/recorders. To address this, the manufacturer recommends viewing this product on a DVD player that does not have recording capability.

25%off
Ub Iwerks: The ComiColor Cartoon Collection (DVD-R)
$5.95 on Sale
Add to Cart