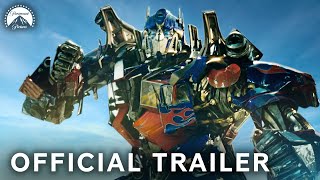 Transformers: Revenge of the Fallen - Trailer

Two years after saving the world with the Autobots, Sam Witwicky (Shia LaBeouf) away at college when an ancient Decepticon named The Fallen returns to Earth on a mission of vengeance. With the Allspark destroyed, the Autobots lose all hope of returning to their home planet of Cybertron, and begin working with an elite military known as NEST to hunt down any remaining Decepticons. But even as they fight for humanity alongside Major Lennox (Josh Duhamel) and USAF Master Sergeant Epps (Tyrese Gibson), the Autobots are acutely aware that not all humans are thrilled by their presence on planet Earth. When National Security Advisor Theodore Galloway (John Benjamin Hickey) wages a heated campaign aimed at exiling the giant robots back into space, head Autobot Optimus Prime agrees to comply with the voice of the people, while warning them of the potential consequences of leaving the planet unprotected. Meanwhile, Sam contends with an overly-cocky college roommate, and attempts to remain faithful to Mikaela (Megan Fox) by fending off advances from pretty - and persistent - co-ed Alice (Isabel Lucas). Just as Sam begins adjusting to the quirks of campus life, a series of inexplicable visions leave him convinced that the struggle between good and evil is far from over. And he's correct, too, because the Decepticons have just discovered that Sam is the one human who possesses the ability to tip the balance of power to the Autobots' advantage, and they're determined to gain the upper hand by dispensing with him once and for all. Now, as Sam and Mikaela unearth a secret about the Transformers that alters the entire course of human history, the Decepticon known as The Fallen prepares to return, and reclaim the plant once and for all.