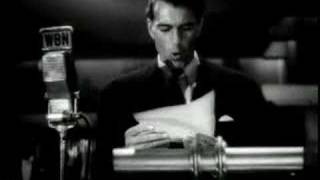 This classic is a moving, poignant depiction of faded glory. Gary Cooper portrays a former baseball player whose misfortunes have changed his life. Barbara Stanwyck, a news reporter, interviews "John Doe" (Cooper.) Her report falls into the hands of a crooked politician who exploits "John Doe" by making him a good will ambassador in a phony political drive, leaving Cooper on the brink of suicide. This film represents director Frank Capra at his best.

Reporter Ann Mitchell (Barbara Stanwyck) is fired from her job by an unscrupulous newspaper tycoon and retaliates by printing a fake suicide note to the editor signed by a fictional "John Doe." The letter is picked up by the public as a rallying point, as Mr. Doe claimed to be so distraught by the problems of society that he'd rather end his own life in protest. But the tycoon uses the publicity as part of a secret plan, hiring a down-on-his-luck unemployed man (Gary Cooper) to impersonate Doe--establishing him as an American symbol and creating a new political movement in the process. Frank Capra's endearing classic also stars the great character actors Walter Brennan and James Gleason.

A spunky journalist, fired by the paper's new owners, hatches a clever scheme to get her job back. On her last day of work, she "discovers" a letter written by a man lamenting the selfishness and injustice of the world--and announcing his plans to kill himself on Christmas Eve as a protest.
The fraudulent missive proves to be a terrific public relations stunt, creating an incredible wave of public support for the man while pushing the paper's readership to an all-time high. But now they need someone to play his role, and they find their reluctant hero in the form of a handsome, naive vagabond. The soft-spoken tramp wants only to make it back to baseball's big leagues, but the common folk love his homespun ways and he soon becomes a candidate for political office.

Politics | Scams And Cons | Social Issues | Reporters | Newspapers
This product is made-on-demand by the manufacturer using DVD-R recordable media. Almost all DVD players can play DVD-Rs (except for some older models made before 2000) - please consult your owner's manual for formats compatible with your player. These DVD-Rs may not play on all computers or DVD player/recorders. To address this, the manufacturer recommends viewing this product on a DVD player that does not have recording capability.

20%off
The Bachelor and Bobby Soxer
$14.39 BLACK FRIDAY
Add to Cart