MICKEY SPILLANE'S KIND OF ACTION, WOMEN and EXCITEMENT...AND THE EXCITEMENT OF THE CIRCUS! 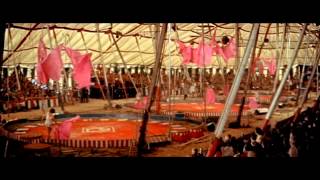 Terror takes the center ring under the big top in this suspense thriller from John Wayne's Batjac Production Company. After escaping from a mental institution, a homicidal maniac named Dublin O'Malley (Sean McClory) integrates himself among comfortable, familiar surroundings of the past - the famed Clyde Beatty Circus. When a series of accidents and close calls threaten to wreck the show, owner/trainer Clyde Beatty (playing himself) and circus manager Frank Wallace (Pat O'Brien) decide to call in crime expert and celebrated detective novelist Mickey Spillane to help solve the mystery. Spillane's sleuthing uncovers the apparent target of the frightening mayhem - beautiful aerialist Valerie St. Dennis (Marian Carr), who has become the obsession of the deranged O'Malley. Amid the roar of the lions and melodious tones of the calliope come screams of fear in this taut and exciting drama.

Like PLUNDER OF THE SUN, the John Wayne-produced RING OF FEAR is a little-seen mystery classic long held out of print by a legal dispute with the Duke's family. Legendary crime novelist Mickey Spillane stars as himself, as does former police officer Jack Stang, who served as the real-life inspiration for Spillane's iconic detective character Mike Hammer. The crime-fighting duo are called in to investigate acts of sabotage at a travelling circus run by real-life animal trainer Clyde Beatty (who also stars as himself), while actors Sean McClory, Marian Carr, and John Bromfield round out the star-studded cast as the carny's suspicious denizens.

28%off
The Greatest Show on Earth
$6.50 Super Savings
Add to Cart