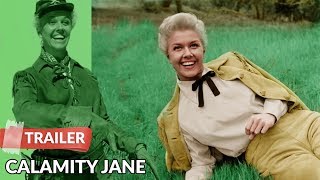 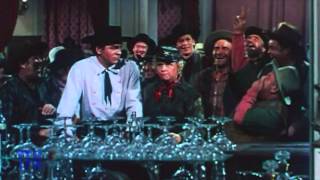 Doris Day and Howard Keel fuss, feud and fall in love as Calamity Jane and Wild Bill Hickok in this entertainment mother lode. At first curvaceous Calamity is too durned busy fighting Indians and cracking a bullwhip to pay mind to such girlie what-alls as dresses and perfume. And Wild Bill is too danged busy wooing a dainty chanteuse (Allyn McLerie) to give a hoot about a hot-headed tomboy. But things change in a rootin',tootin' big way when each becomes love's target. There are wide-open Technicolor Western spaces, lots of high-stepping dances and a hummable humdinger of a score by Academy Award-winning songwriters Sammy Fain and Paul Francis Webster, who took their first Oscar for the classic ballad (and '50s megahit) "Secret Love".

Energetic musical about the unlikely romance of famed Western tomboy Calamity Jane and gunfighter Wild Bill Hickok. In an attempt to lure a handsome Army lieutenant away from another woman, Jane trades in her gunslinging and uniforms for housekeeping and dresses, and wins the affections of Wild Bill instead.