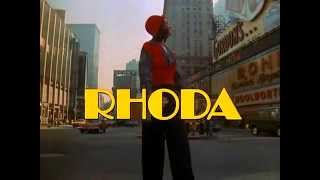 If Mary (Mary Tyler Moore) was the single woman everyone wanted to be, then Rhoda (Valerie Harper) was the one they wanted to befriend. From her first appearance on THE MARY TYLER MOORE SHOW, Rhoda won hearts with her street-smart blend of sass and style. By the time she had her own spin-off, the fans and critics were eager to follow. This Emmy- and Golden Globe-winning sitcom follows the outspoken New Yorker back to her hometown, where she attempts to start a new life amidst interference from her pushy family. RHODA: SEASON ONE includes the show's hilarious pilot, along with every episode from the series' first year.

Rhoda (Valarie Harper) was the popular spin-off of the beloved Mary Tyler Moore Show. Rhoda began when she goes home to NewYork for a visit and unexpectedly meets Joe (David Groh) and decides to leave Minneapolis for New York City.
In the first season, Rhoda and Joe fall in love, get married and set up life together in spite of the non-stop meddling of Rhoda's overbearing mother Ida (played by the brilliant Nancy Walker), her needy depressed sister Brenda (Julia Kavner, who plays Marge from The Simpsons), Carlton, the doorman with his memorable quote "Hello, this is Carlton your doorman." and her loving but ineffectual father Martin (Harold Gould, The Sting).
“The Wedding” (a one-hour special episode) reunites Rhoda with her old pals from Minneapolis–Mary Tyler Moore, Ed Asner, Cloris Leachman, Gavin McLeod, Ted Knight and Georgia Engel and drove ratings through the roof.