The House by the Cemetery (Blu-ray)

Read the fine print. You may have just mortgaged your life. 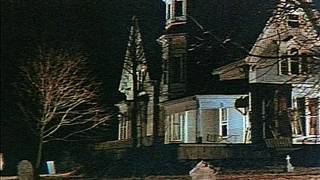 Dr. Norman Boyle (Paolo Malco), of the New York Historical Society, accepts a research assignment abandoned by a colleague who has committed suicide. The project requires the researcher to temporarily take up residence in a New England mansion along with his wife, Lucy (Katherine MacColl) and their son, Bob (Giovanni Frezza). Norman discovers his colleague had become consumed with the history of the home's original owner, a turn-of-the-Century surgeon named Dr. Freudstein who possessed a fondness for illegal experiments. Further investigation reveals Freudstein had found a way to stay alive by using cells derived from fresh human blood. The Boyles find out the hard way that the maggot-stuffed, undead doctor remains lurking in the shadows of the house, killing anybody who crosses his path.

While the plot does at times lose itself to vagueness and the inexplicable, Italian director Lucio Fulci reinforces his "Godfather Of Gore" moniker as visceral sequences (human mutilation aplenty, along with a gut-wrenching decapitation) unfold before the camera in the maestro's customary extreme close-up style. Made during the height of his career, HOUSE BY THE CEMETERY is one of Fulci's most admired favorites. A percentage of the film's popularity must also be credited to the inadvertently humorous English dubbing of Italian child star Giovanni Frezza's "Bob" character, performed by a much older female actress.