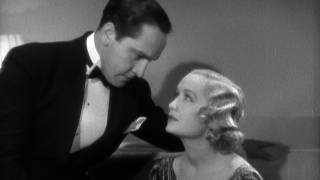 DESIGN FOR LIVING was based on the stage comedy by Noel Coward, though little of his dialogue actually made it to the screen. Playwright Fredric March and artist Gary Cooper both fall in love with Miriam Hopkins, an American living in Paris. Both men love the girl, and the girl can't make up her mind between the two men, so the threesome decide to move in together--strictly platonically, of course. As the men gain in success and prominence, the chasteness of the "menage a trois" begins to be threatened, and soon both March and Cooper clash over Hopkins. She reacts by marrying her wealthy but dull boss (Edward Everett Horton). Miriam is bored to tears until March and Cooper invade one of her husband's stuffy parties and chase the tiresome guests away. Miriam's husband huffily agrees to a divorce, and the girl returns to her unorthodox relationship with her two former suitors. The subtle homosexual implications of the Noel Coward stage original were dissipated by the presence of the aggressively masculine Gary Cooper and Fredric March in the film version of DESIGN FOR LIVING. Replacing these implications were the equally subtle but more "mainstream" boudoir innuendos of director Ernst Lubitsch.