You can't run from evil when it lives next door. 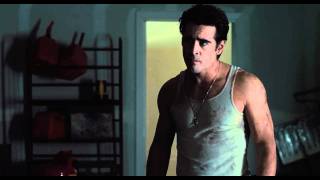 A suburban Las Vegas teenager realizes that his new neighbor is a charismatic vampire in this remake of the 1985 horror comedy hit. After years of climbing to reach the top of the social ladder, high school senior Charley Brewster (Anton Yelchin) finally rules the roost. Just as Charley ditches his best pal, "Evil" Ed (Christopher Mintz-Plasse), and starts dating the most popular girl in their class, however, a handsome new face appears in the neighborhood. It belongs to Charley's new neighbor Jerry (Colin Farrell), an outwardly amiable guy with a quick smile and a sharp wit. But when Ed vanishes without a trace andCharley sees a side of Jerry that everyone else seems to miss, the nouveau popular teen becomes convinced that the nice-guy act is a cover for something truly sinister. Unable to convince his mother (Toni Collette) that Jerry is a genuine bloodsucker, Charley turns to Las Vegas magician Peter Vincent (David Tennant) to help exterminate the demon before he drinks the entire neighborhood dry.