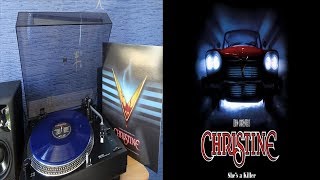 Composed by John Carpenter and Alan Holdsworth.
Christine, based on Stephen King's novel about an unusual kind of car repossession, was taken by John Carpenter from book to screen in a blazingly short time. Rather than bypassing his usual methods, as he did with The Thing, Carpenter once again chose to do the score. The original soundtrack released from the movie was a brief affair indeed, offering up a small selection of rock & roll tunes used in the movie, plus a short selection ("Christine Attacks," here with the subtitle "Plymouth Fury") from Carpenter's score. As it is, this Tangerine Dream-influenced, mechanically pounding number is probably the best thing in the score, highly visual, threatening, and relentless. As with the best of Carpenter's work, it's enough to haunt your dreams for a few days -- a property shared by the scores for Halloween and The Fog (both on Varese Sarabande). Christine, though, suffers from a very rushed situation. Rather than having the time to craft something new, Carpenter reached back into the bag and pulled up variations on old themes. As a result, you can hear a variety of familiar elements in here, from the high-pitched synthesizers designed to make you quiver to revised score elements from Escape From New York, Halloween, and The Fog. The arpeggiated theme from Halloween is barely disguised in terms of musical structure (he builds on the same structure) while the forceful percussion-based pulse of the chase-type music is straight out of Escape From New York. In terms of the recording, the music sounds a little unfinished, and equalization isn't the best, though hiss has been reduced to an inaudible level. The highs tend to be inconsistent, the lows, probably because of the synthesizers (sounding as though Carpenter's Prophet V and Xs were giving way to Yamaha instruments) either on the feathery side or a little softer than they should be in the punchier parts of the score. For all the problems and weaknesses of this score, though, it still manages to rank above They Live in terms of quality and variation. ~ Steven McDonald